As hinted in the last post I suffered a failure of a scarf joint while laminating the clamp in place. I guess I should start by discussing scarfing…

For items which we are laminating in place, I think the right approach is to first produce a single “stick” which is the right size for the component you are laminating – so for example, the clamp was made from three laminations 90mm wide by 15mm thick and just under 27ft long (sorry for mixed units, I was born in the 50s!)…

To do this one glues together several parts, and the approved method is to “scarf” them. This involved putting a “chamfer” on each end thinning the plank down to nothing – this is meant to be over something like 4 to 6 times the thickness. Then when you join the two planks the joint is therefore using a glued surface of 6*thickness*width in area…so in this case (where I made the chamfer about 100mm long) we have a glued joint of 100mm*90mm or 9,000sqmm (about 4 square inches to continue the mixed unit theme).

This means that there should be plenty of glue to securely hold the two parts together, and we get a nice smooth transition between the parts.

So you can imagine my surprise when a large BANG announced the failure of one of the clamp laminations as I was fitting it, and not only split the joint but cracked the plank in two over a length of about 3 feet! See below:

Now one should note that “fitting” did involve an hydraulic trolley jack to persuade the plank to follow the sheerline, but none the less, this-was-unexpected.

A bit of inspection, testing and reading discovered the issue. I had used PU (foaming) wood glue on the scarf joint. And everyone talks about A) the need for a close fit between the parts and B) the way the glue forces the joint apart, and therefore the need for a lot of clamps.

I tried another joint on the bench, and found I (well in fact Louise) could make it fail at the glue line with a strong “shove”, and the failure seemed to be because the scarf joint was not perfectly smooth, and so the glue needed to fill the gap. This gap was probably only 5 to 10 thou, but that was enough for the glue to form a foam in the gap, and the foam just does not seem to be strong.

So there were two conclusions from this:

I read a lot on this topic, and even purchased a mitre saw (thinking this would help) – if anyone wants a new Screwfix Compound/Mitering Saw Like this then let me know – they just halved the price on their site, and it’s sat in my workshop unused for a month… a poor decision 😦

I contemplated planing the scarfs by hand, (but there will be hundreds) I googled it and looked at lots of ideas and eventually went for a design I saw on Duckworksbbs.com – a great site!

This basically involved adding some “runners” to a standard electric plane, and then a guide which holds the timber you want to chamfer at the right angle and lets you run the plane up and down till it’s done… The pictures below probably explain things, but I can highly recommend it… 30 minutes to make, and it makes each joint a matter of seconds.. Perfect! 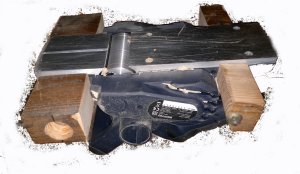 Despite the poor quality of my “photoshopping” I think you can see that this just involved bolting 4 blocks of wood to a standard plane, the front two are attached to the holes for the rebate/fence things, and the rear two are held by a thru bolt which is inserted thru the body where the “adjusting spanner” was stored. It’s a reversible modification and simple to arrange… (it’s a B&Q plane).

This is just three planks set to give the “right”  scarfing angle and guides for the plane to run down… Four softwood blocks were glued to the underside to make it stiff enough for holding in the Workmate, and strong enough to withstand the clamps holding the job to be scarfed.

First we can see the jig mounted on the workmate, with the timber to be scarfed clamped in place (it needs to be in the middle, so you don’t plane the sides of the jig – like I did !)

…and here we can see the plane in place ready to start with the “runners” just resting on the guide of the jig. 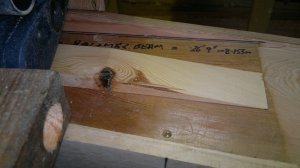 The finished (and knotty)scarf – ready for glue

… and the finished article. So far it seems to do a great job, and with the thickened epoxy as an adhesive seems to make very solid joints….