The last few weeks have been devoted to progressing the Landrover rebuild to provide a comfortable and reliable tow vehicle, vast amounts of foam insulation, lead-loaded sound deadening and carpet and new LED lights might make it quieter, but I suspect may have more effect on the fuel consumption! But with some of the new doors fitted onto the new chassis it’s starting to look like we might get there! Personally, I rather like the UN-style paint job (the doors came from different places and the new bulkhead was second hand) with a combination of white and black doors metallic blue bulkhead and the original (if faded) blue and white Landy paint job. As an alternate I fancy respraying the whole thing in “ASBO” orange, but there are descenting voices in the camp!

However, on the nautical front we have now finished cladding the inside of the boat, mostly a matter of wearing enough to combat the cold in the workshop! But a Major Milestone!

We had suspicions that the cladding we have been using was perhaps a little heavier than the 420gm/sqM required by the plans, and we actually ran out of the roll provided by Mike Bell with about 3m to go – so I ordered the heaviest we could find (800gm/sqM biaxial cloth) and when it arrived it became clear that this was almost identical to that we have been using – probably explains why we have used almost 90kg (count the empty drums) to get this far, and at ~£400 for 30kg this has been quite an expense.

However, I think it means Befur is pretty tough (to match her container-ship lines – it’s clear that she is no “elegant light-weight dart”) , but probably a good thing as we come to learn how to sail/steam her!

On the subject of sailing and steaming; we have also engaged Paul Fisher (Selway Fisher) to help with the development of some cabin layout plans and structural ideas for securing the mast/tabernacle to the deck/cabin.  Can’t wait to see what he comes up with!

I have mostly come to grips with the cavalier way that nautical terms play with the English language, but still fitting the “floors” (which perform the job of “joists”) to hold the “sole” up (“decks” to you and me) rankles a little!

However, it was a nice job to get back into the swing. We made these Floors much earlier, by laminating them from Douglas Fir alongside the moulds before we started planking – seems a long time ago. The nice thing was that they did seem to fit fairly well.

They are bedded onto more thickened epoxy, with epoxy fillets to enhance their grip onto the hull planking. As usual with this design approach there are no screws or nails – ensuing that there are no holes for moisture to get into the wood.  Perhaps I could have got closer fits as it took another 2kg of epoxy to complete the job – but they do need to be well fitted as their more important role (other than holding up the deck/sole) is to provide lateral strength. by bonding the hull to the keel (aka “hog”) and Bilge Stringers.

Some pictures seem appropriate: (also showing the temporary steps to stop me breaking my neck climbing in and out)… 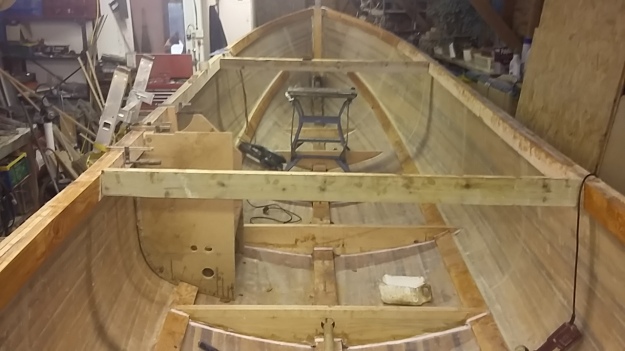 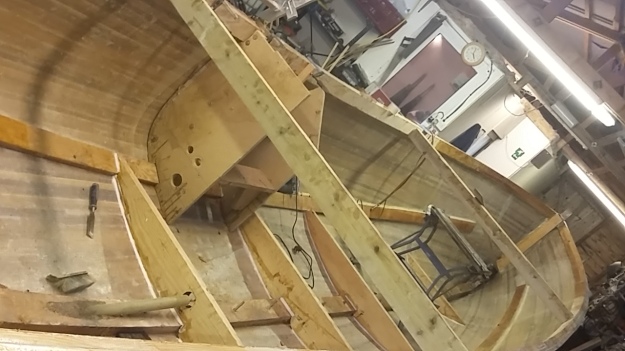