Just a quick note on recent days’ work. We have been insulating the inner boiler casing and installing the funnel (at a jaunty angle)!

The boiler has two casings- one surrounding the burner, tubes etc. (the hot stuff) and an outer one of wood, with an air-gap in-between to keep passengers safe. This also includes a double skinned chimney (also to keep people safe – Lou has quite a scar from another steamboat where the funnel was not lagged or double skinned).

We are using “ceramic fibre board” from Vitcas This is quite expensive, but robust, capable of standing 2,300F (1,250C)  and capable of being cut with a knife or jig saw.

However, the mental gymnastics required to think about how it all fits together inside the boiler I find quite hard. However, after a deal of cutting and trial and error it’s almost done.

Insulation in place, and a view of the inner funnel opening above the steam drum.

Insulation in place, also showing one of the blocks secured to the top of the boiler holding the inner and outer funnel.

As we needed to remove the casing, I also took some pictures of the “tube nest” which shows the 200+ 12mm tubes all expanded into the steam and mud drums.

This lot totals about 30sq-ft of heating surface which is capable of producing about 300lbs of steam at 250psi per hour! 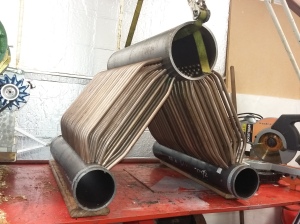 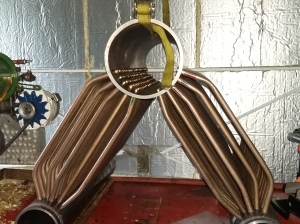 This is formed from some 7-inch stainless steel liner and enamel outer flue. This is what you would find attached to your average AGA.

Boat aesthetics required that this is attached at a jaunty angle (5-degrees) to provide an impression of dashing speed etc. However, making things at an angle is often more difficult than making things straight.

We have made the casing from 3mm steel and this has provided a solid foundation for mounting the funnel.

The inner liner is  178mm dia, so I bored out the hole in the top plate of the casing to size with the head of the mill set over 5-deg to get the required oval (a bit OTT I think).

I opted for a set of 20mm square blocks with their base machined to the aforementioned 5-degree angle and then M5 screws are used to attach these to the roof of the boiler casing to provide a “socket” for the liner.. The inner liner also has a “bulge” about 15mm above it’s lower end, so I machined notches in these blocks to engage with this bulge and thus provide vertical (or jaunty angle) support to. 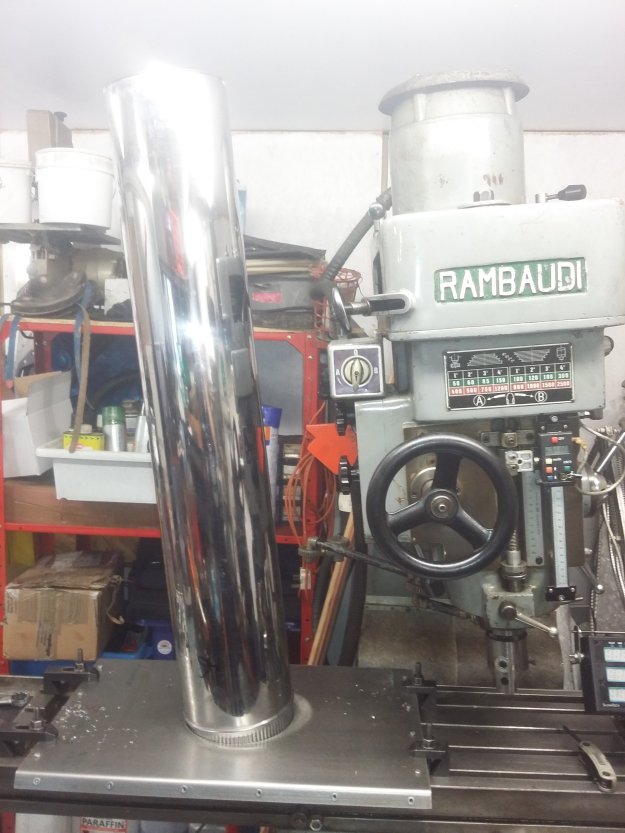 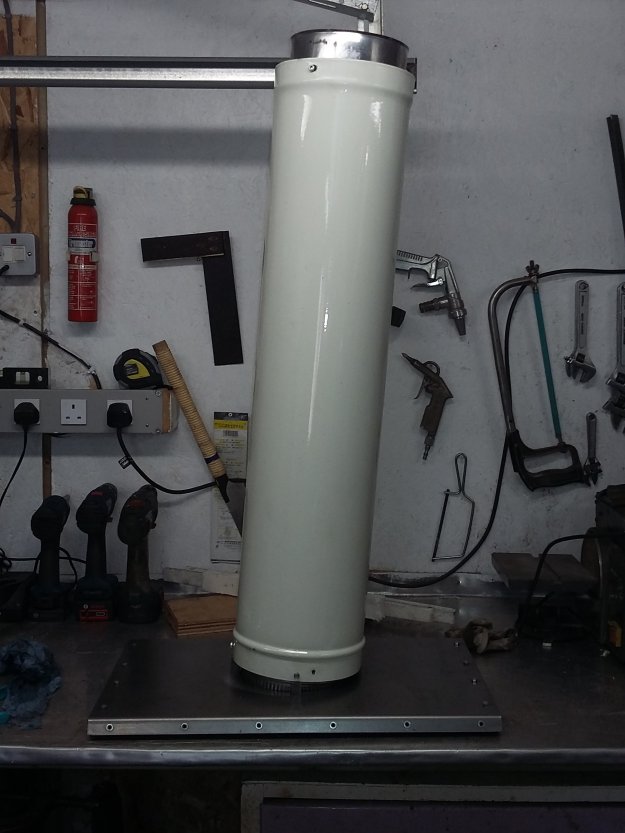