Well a definite milestone was reached today; the boiler passed its official initial hydraulic test at 500psi conducted by our Boiler Inspector.

It will never need to be pressed that hard again, next we have a 375psi test with all the ancillaries fitted (gauges, valves, plumbing etc.) then we put some fire in its belly and prove that the safety valves will stop the pressure going more than 10% higher than its 250psi operating pressure – then we will be allowed to insure it and use it in anger!!!

This might seem like a bit of a palaver, but a boiler failure will typically kill everyone within many feet – so it pays to take care.

When you consider that the pressure trying to force each end cover off during the test is equivalent to a large African Elephant standing on it, you can see why it uses a bunch of M16 and M20 studs to hold everything together! 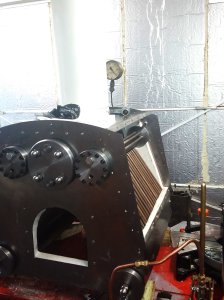 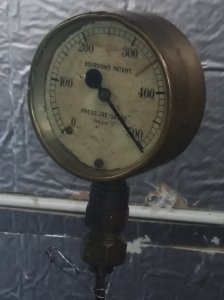 It took three attempts to get everything perfect, and here are a few notes for other builders:

Either way, an important day on the route to launch day!

2 thoughts on “All Pumped up!”