Over the last few days we have encountered the two items mentioned in the title in real life, in a slightly stressful way. 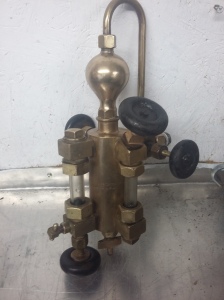 One of Elijah McCoy’s displacement lubricators – actually this one was made by the Detroit Lubricator Company.

While Wikipedia suggests two origins for the phrase “The Real McCoy”, the most well documented version relates to one of the brass beauties shown here.

It is a displacement lubricator patented by one of Elijah McCoy’ in the 1870s in America.  These devices perform a simple, but vital, role of providing internal lubrication for steam engine cylinders and valve gear, but they do it using an apparently impossible process.

Basically they are attached to a ‘T’ in the steam line supplying the engine. You fill the lubricator with oil, and then via a mechanism which is not at all intuitive, the steam in the steam line to the engine decides it would prefer to be in the lubricator and, as it migrates that way and condenses as it cools, displaces the oil which is forced back into the steam line. So the connection to the engine sees steam heading one way and oil heading the other with nothing obvious causing that to happen!! The lubricator has a number of valves to control the rate that this happens and allow the machine to be shut off and refilled while underway.

In my case I purchased this at an auction a few years ago, and prior to fitting it I needed to pressure test this (as with all other pressurised components). As I did this, it revealed a number of leaks and failed seals on the two sight glasses.

Taking it apart revealed seals that may once have been rubber, but in the intervening years (100+?) had turned into something more like wood. I managed to find some replacement ones that just needed shortening, but fitting these is a tense process as cracking the glass would be just too easy.

Anyway, we managed it, and with a little TLC and returning some of the needle valves, we had the Real McCoy: a leak-less displacement lubricator.

The rest of the week has been consumed by attempting to fit the fittings to the forward end of the boiler.

This seemed as though it would be a simple process, but pushed me to the edge of serious depression.

Due to the temperature and pressure of this assembly (250psi and 200+ degrees Centigrade) all of this needs to be in steel pipe with screwed fittings.

The problem is that while one can imagine how it all goes together, the reality is more complex, principally because you can’t actually screw all the parts together as the end points are fixed and so you can’t tighten everything.

Moreover it appears to need a certain sort of brain/thinking to figure this out – my respect for plumbers has been raised considerably! This was born out by half an hour in Penrith at the sales desk of a pipeline and hydraulic supplier while the staff demonstrated considerable fortitude (and difficulty) in “rummaging” through their stock to find the combination of bits we needed. (Actually I found this quite encouraging – if they couldn’t sort it out, perhaps I was not being a complete klutz.)

The net of this story is that what you need are “cone unions” – and I think the ones provided by Bessegers (like these) are by far the best design. These allow you to assemble the screwed bits, and then attach the assembly to the component you are plumbing without needing to move the joints you have made.

The second take away, is that sometimes you need to opt for an indirect path for the piping to allow you to accommodate the offsets in all three dimensions.

2 thoughts on “A Plumber’s Nightmare & a Real McCoy”