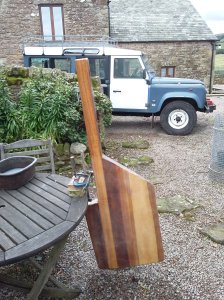 The rudder with pintles ready for varnish and fitting

One of the major outstanding jobs on the hull was to build a suitable rudder. As Befur is meant to sail (as well as steam) we wanted to make sure we provided some thing effective.

Researching the subject covering everything from historic articles on Chinese Junk development to the Steamboat Associations’ handbook and designers from Selway Fisher to Dave Gerr’s excellent book on ship design and lots of trawling of the Junk Rig Association’s web site we discovered some important facts:

Balance: The idea of balance is that the rudder is built with part of the blade ahead of the rudder-stock, so as it is turned some of the force of the water helps with the turning, off-setting the tendency of the rudder to want to return to the straight-ahead position. This reduces the effort needed to steer the boat.

Clearly, there is an upper limit to the amount of balance included in the design, or the rudder will continually try to swing into “full lock”. Reading up we concluded we would aim for 20% of the rudder surface area to be ahead of the rudder stock. We failed to recognise that of course the actual pivot-point of the rudder is not in the centre of the rudder-stock but on the centre line of the “hinges”/pintles.

So our actual balance is somewhat less than this intended 20%, so we will see. in time. if Befur is easy to handle. Of course handing is likely to vary considerably between steam and sail, so it’s probably going to be a compromise.

We will initially just fit a simple tiller to control the rudder, but the plan is to also install hydraulic wheel steering, as it will not be possible to control the engine and reach the tiller from the same seat – so some “drama” will probably ensue as we attempt to pick up a buoy or dock.

Profile: While a flat plate rudder will work, they produce more drag and deliver less “turning moment”. The better plan is to make the profile of the rudder an Aerofoil (Aquafoil?) shape. This causes the rudder to produce sideways “lift” helping to pull the stern around.

It emerges that standard aircraft aerofoil sections are appropriate, and the most well known are the NACA profiles developed by the American National Advisory Committee for Aeronautics. This is because water and air can both be considered “fluids” (Hence all the work on Fluid Dynamics in Formula 1 car design).

These profiles are identified by 4 digit codes, the first two numbers indicating the “camber”  of the section and the second two numbers indicating how “thick” the profile is. As the rudder needs to provide “lift” in both directions (port and starboard) the camber is zero producing a profile that is symmetric about its centre line.

The “thickness” of the profile determines a) how much lift the rudder will produce for a given speed through the water (larger profile = bigger lift) and b) how much the rudder can be swung left and right before it stalls and the lift is lost.

Clearly this is also a compromise – but we settled on a NACA0015 profile – this meaning that the thickest part of the profile is 15% of the length (chord) of the rudder. Again, time will tell how good this decision was.

An old friend Nick Pilbeam from Aberdeen volunteered to come and assist in the manufacture – thank-you Nick.

We adapted the design to take advantage of the contents of my boat-building timber store. I have become a considerable fan of epoxy-composite structures and of laminated timber designs, so we started with a rudder stock of 75mm square Iroko and a blade core of 25mm thick plywood.

These were jointed via a “cross-halving” joint (with the blade inserted into a slot cut in the rudder-stock. This was then built up with lamination of Iroko and Douglas Fir.

The whole rudder was to be wrapped in epoxy-soaked glass cloth (in the same way as the hull is built), but this time finished in the clear (with varnish to protect the epoxy from the Sun’s UV radiation). This approach means that at least a small part of the boat will look like the wooden boat that it is!

Having laminated the components together with thickened epoxy, we then undertook the initial profiling with a router running on a pair of slides which had been cut to match a set of co-ordinates computed using this rather helpful web page.

In practice (after having repeatedly struggled (and failed) to correctly copy the measurements from the spreadsheet to the template) we concluded that it was not possible to accurately route the leading edge portion of the aerofoil from the template. This was because the rate of change of thickness is so fast at the leading edge, and as you need to keep the router normal to the template to get the correct profile, it was very easy to make a BIG mistake. 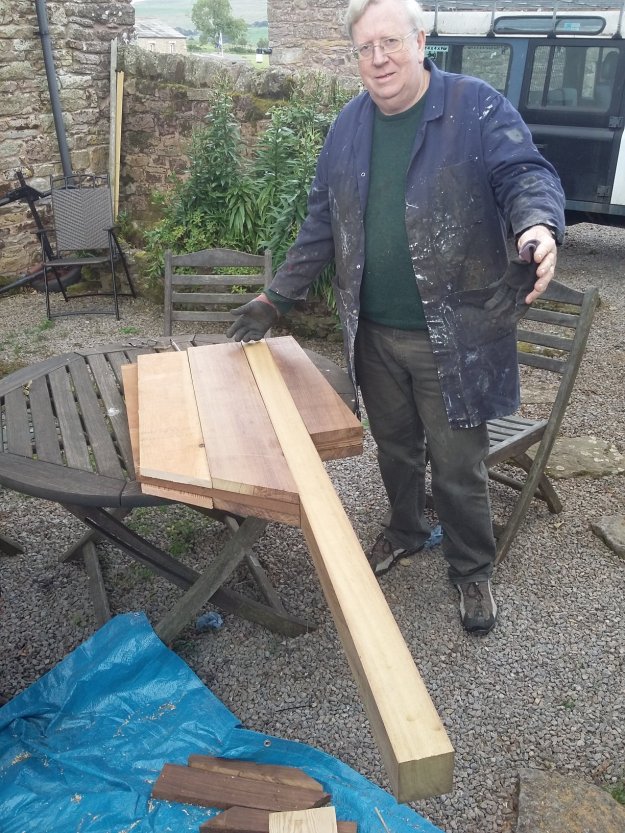 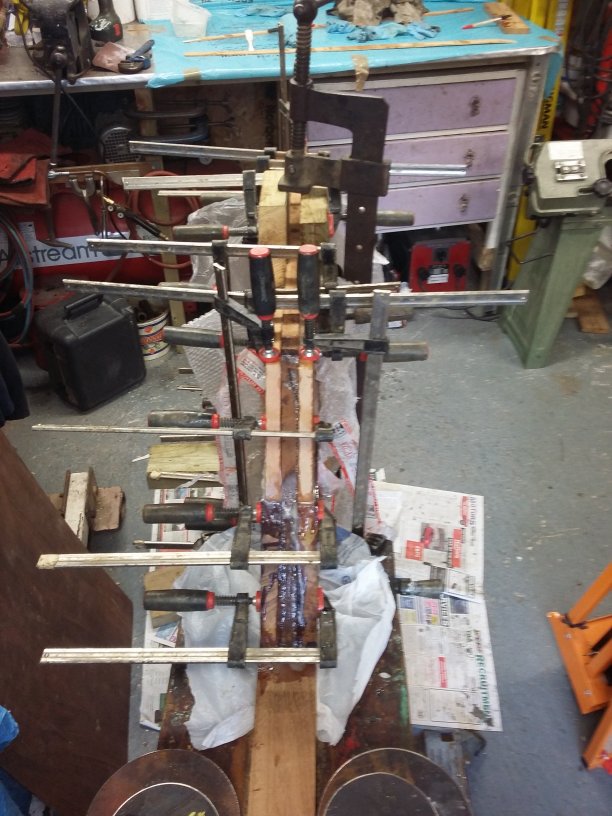 The blank assembled with thickened epoxy and clamped up tight 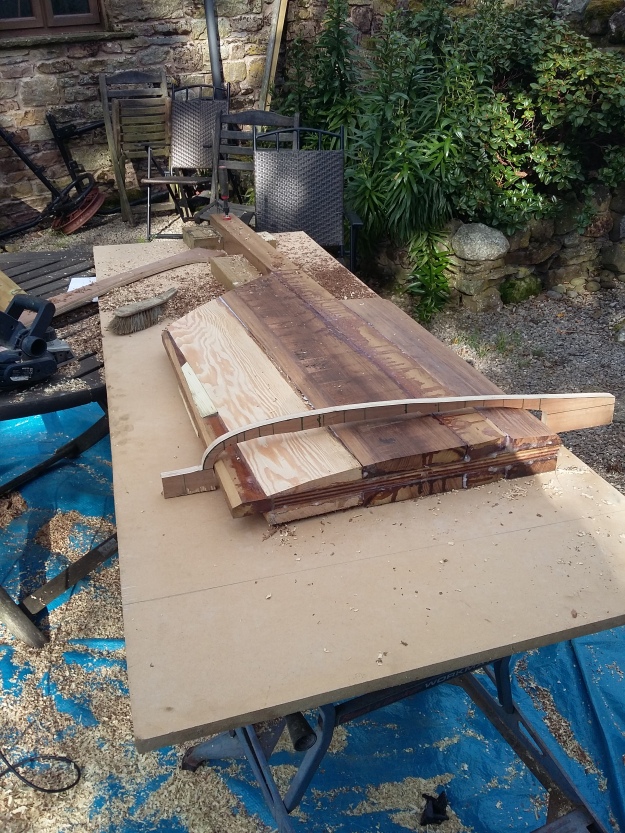 An initial check that all is OK before setting to with the router. 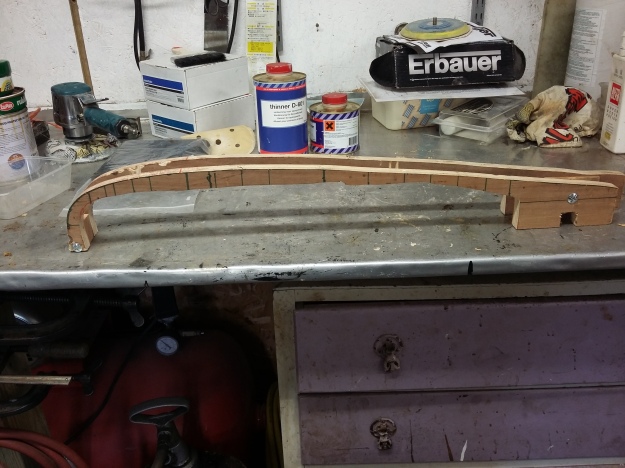 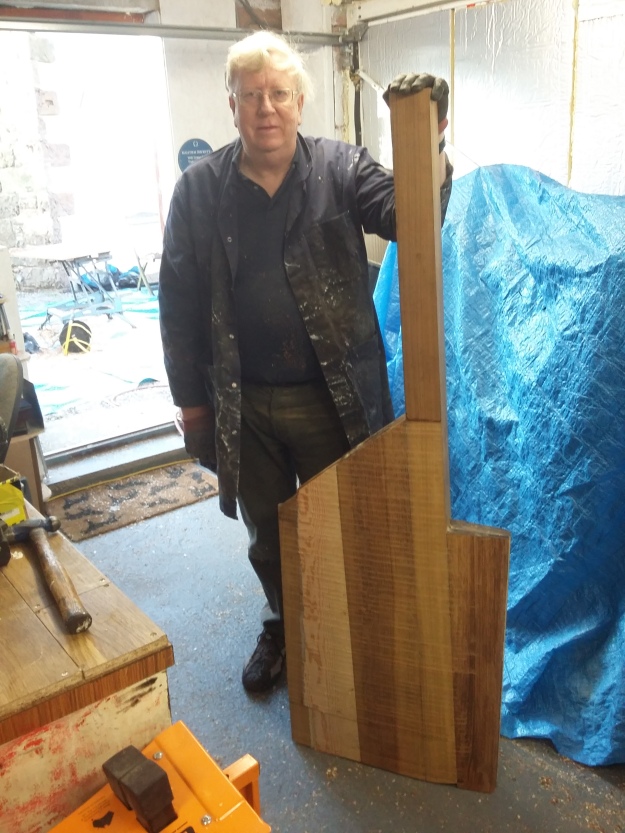 The assembled blank (with Nick to provide scale) routed, and planed to shape, ready for final sanding, epoxy coating and cladding. 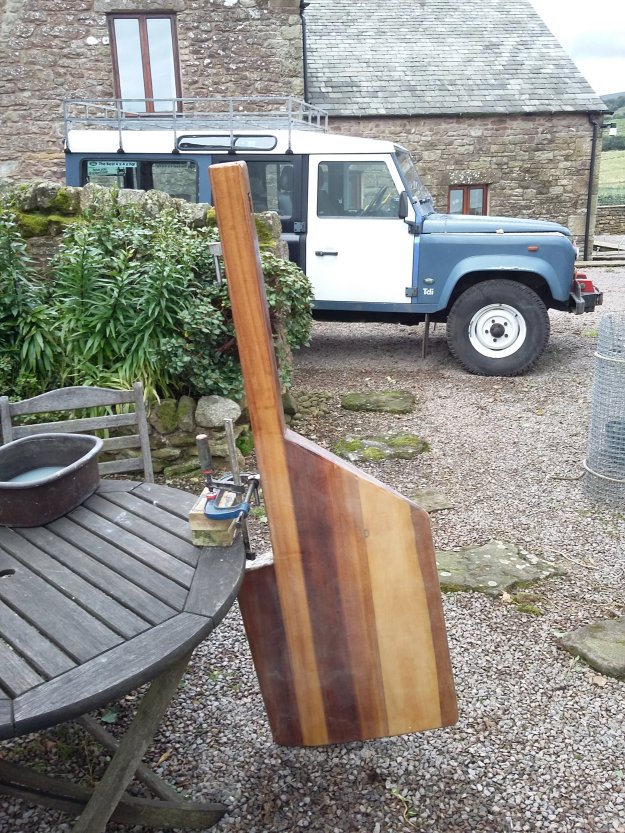 The rudder with pintles ready for varnish and fitting

2 thoughts on “Providing some Direction – Befur gains a rudder”