Those of you who have been following Befur’s progress will know that our first year in the water was marred by the failure of the crankshaft in the Leak Compound engine I built.

This post deals with the manufacture of a replacement, and the results of my research/experience into the approaches to building cranks for “small” (<20HP) marine steam plants.

In the automotive world forging and casting are the standard approach, in the motorcycling world many cranks were “made-up” (aka “fabricated”) from steel shafts and cast flywheels either shrunk together or bolted together using tapers of one form or another.

In the marine world all of these processes are seen (with the possible exception of forging), but two more are often seen; these being: a) “carved from the solid”, where the complete crank is machined directly from a single billet, and b) fabricated using loctite and shrink fits.

In building my Leak compound I followed the “Loctite and Shrunk Joints” approach, as this was one of the approaches suggested in the “manual”. The idea is that the crank is composed of four rectangular steel webs, 5 steel journals (3 main bearing, 2 crank-pin) and 2 bolt-on cast iron balance weights.

These are assembled by heat-shrunk fits for most of the joints, but three have to be loctited together, as they must be initially  “movable” to allow the crank journals to be correctly aligned.

In doing this (as noted here) I ran into initial problems because the webs as drawn do not have enough “meat” around the journal pins, so as the assembly cools the stresses in the webs cause distortion Producing a bent crank.

In discussing this with other (real) engineers, they confirm this issue and that there are well publicised parameters as to the amount of metal needed around shrunk journals – and the Leak drawings do not meet these recommendations – you can read about this in the SBA’s Funnel magazine.

Avoid Loctite at All Costs! 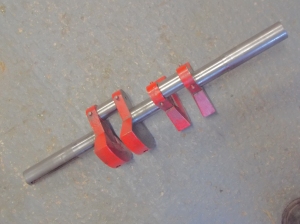 There is no doubt that shrink fits work, but my experience was that, despite having run the engine on the bench and in the boat (prior to launch) for several hours, one of the loctited joints failed within 20 minutes of entering the water. (It failed at HP Web/Centre Main Bearing Journal joint).

It actually took me several weeks of inspection and analysis to realise this is what had happened,  because, “fortunately”, one of the allen bolts retaining the balance weights prevented the total failure of the crank. While this made fault finding harder it probably saved a much more expensive and catastrophic failure, and a stranding in the lake!

What was very telling was that, as I wandered around bemoaning my fate, more and more people said “yes that happened to mine too”!!!!

A few suggestions were made as to better assembly methods (like “cotton-reeling” the journal to provide a close fit at the ends of the joint while leaving space in the centre for the adhesive), and the use of taper-pins to secure things, I am left with the very clear opinion that Loctite has no place in marine steam cranks. My further reasoning goes like this:

Other options for Crank Construction

So we are left with the following approaches, and the pluses and minuses of them:

My (1947) Harrison L5 will swing nine-and-a-quarter inches over the bed, and was just able to accommodate the cast blank for the machining of the main bearing journals (as the casting has cast-in counter weights). But it was not big enough to allow me to turn the crank-pins, so we will do this on the milling machine.

The  first job was to drill the centres in the ends of the crank. These were marked out by scribing a number of diametral lines and then “averaging the result” to place an initial dot-centre punch mark.

(I always find starting with a casting a very stressful process. I have heard sculptors say “all you have to do is imagine the horse (or whatever) hiding within the stone, and then just chip off everything that isn’t horse”. This may be correct, but I am no sculptor, and identifying which bit of the casting is not “crank” seems to be a very error-prone problem.)

As my crank is rather long (having the overhangs to carry the pump/alternator drive and shaft belt pulley) it only just fitted in the pillar-drill, and really needed a couple of extra hands to set it vertical and drill those initial centres – but the job was done. 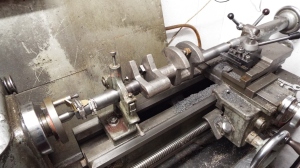 Using a fixed steady to reduce the chatter

Having produced the centres, I then mounted the crank between centres on the lathe , with a bit of scrap brass attached to the shaft with jubilee clips to allow the driving dog to provide the drive.

Fortunately the crank just fitted between the 24″ centre distance the Harrison will accommodate.

We could then start to turn the tail-stock-end of the main bearing journals (as shown in the picure).

The main bearing journals are intended to be finished to 1.285″ (to fit the bearings line-bored by the very helpful Mr Maltby), while the eccentrics and drive arrangements all require a 1.25″ shaft. As the main and crank-pin journals are to be ground to final size I am going to turn these to 20-thou over-size, to let the crank-grinders finish the job.

Being such a long (and spindly) crank, supported only at the extreme ends, chatter when machining was always going to be a problem. To try to help with this I wanted to use a fixed steady. Initially I took off just enough to get through the skin of the casting, and get a circular section for the steady, and then swapped the crank end-for-end, so that the steady could be fitted, and a better job done of the opposite end. (If you look closely as the picture above(click for a big picture), you can see this (unavoidable) chatter on the shaft inside the steady that occurred when the initial cut to circularise that piece was made).

It is also perhaps worth noting the “jacking screws” fitted between the webs to prevent the pressure on the centres from distorting the crank, and also adding a little more rigidity.

With the steady in place, I then turned the centre main bearing to it’s 20-thou-over dimension. This is a fiddly job as I needed to use a modified boring bar to reach in past the counter weights, and had to machine the journal in two parts (right & left). I could only reduce each end by 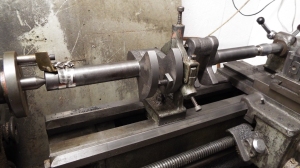 about 30-thou before addressing the other half. I also left a stepped shoulder at each end to let the grinders create nice (stress-reducing) radii on each journal. At the same time I skimmed the faces of the webs to ensure the grinding wheels could finish the journals, without removing any more material than needed, to preserve as much strength as possible in the webs.

At this point I could move the steady to the centre journal, to better support the blank for the rest of the machining. 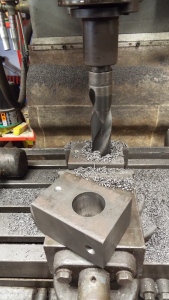 Clearly, to machine the crank pins we need to have centres on the crank-pin-centreline. If machining from a billet this is not a problem as there will be material in the blank in which these can be placed, one could of course add suitable end pieces to the pattern, which can be later removed (sawn off!).  However, I could not add these to the ends of my pattern, as it would have made the casting too long to fit into the lathe. So, I opted for making two removable end-pieces, with 1.25″ holes to fit on the ends of the crank, adjustable cotters to clamp them in place and the centres for the crank-pins accurately coordinate-drilled on the milling machine (thank the lord for DROs)!

The picture shows one finished end-piece and the other being drilled with a 1-and-3/16 drill (suitably sharpened on the Quorn!).

The final bringing to size was done with a boring head, and plug gauge (and the inevitable honing and emery paper to get a good fit.

So as the picture shows (remember you can click on them to get full size images) the assembly is now fitted  between centres on the mill ( using rotary table and tail-stock) ready to have the crank pins turned to their +20-thou dimension.

It is by no means simple to position these end pieces correctly. The were machined so that when rested on 1-2-3 blocks I could ensure that they were parallel, but again the “sculptor’s problem” of positioning the un-machined crank-pins centrally begets more blood-pressure.

It has taken a while to find suitable cutters and holders, but eBay eventually produced an appropriate 25mm dia, long-series end mill and holder at a price I could afford! (As always one learns new things – today’s gem is that 40INT and BT40 taper holders do fit together, but need a different length of drawbar to be used; more work. Duh!!!)