The first week of August is “Windermere Week” for the SBA, where a number of members gather, with their boats, and a number of marine and social events occur. This year it marked the 50th anniversary of the SBA, so more jollity was ordered and delivered.

Louise and I attended with Befur, and we had a fun (but rather tiring) week (Monday to Sunday).

We were lucky enough to be joined by Simon Maltby and Dean Mason (work colleague of Simon who is hoping to join the Royal Navy, so perhaps this counted as work experience!!)… These two made things soooo much easier, with a level of youthful energy and practical experience (THANK YOU both).

Simon took HUNDREDS of pictures and a great deal of video, so of course we have no pictures of him, being behind the lens all the time, but you can see Dean on the tiller in the video above, (please ignore the wind, burner and engine noise!).

A big thank you to both of them,

There was a plan… and some of us followed it some of the time.

We were expecting 50 steamboats, and I think over 40 made it…(here’s a document recording the boats registered for the event).  We gathered in the north lake, we rafted up in the south lake, we clustered at the Windermere Jetty, we dined in style at Brathey and the Jetty, we visited an industrial museum, we talked (a lot) and generally loafed about the lake in a steamy way.

These pictures and videos are intended to provide a feel for proceedings (as always, click for larger copies. Thanks to Simon & Dot  for taking them!). 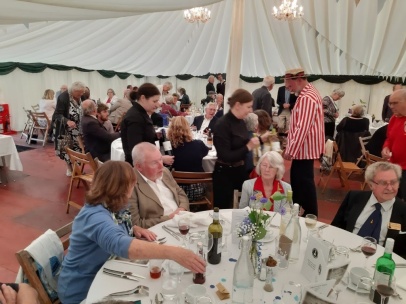 There were a few notable moments:

A couple of videos from Ian Davies’s drone (Befur at rear from 5:45)

All gathered at the Windermere Jetty (aka SteamBoat Museum)

The parade from on-board (Simon Maltby)

We were generally pleased with how Befur performed (under steam and sail) but are now ready to undertake an “upgrade/maintenance” project befor it gets to cold to tow her home to the fells. This will include:

A ship’s-rat’s-eye-view of the engine

Slo-mo of engine, and you can hear where the knock is!

Searching for the wind while being a taxi