As my first job was working as an Instrument Technician for Shell Research in the Applied Physics department, I became interested in the measurement of physical systems… thus I was interested in Engine Indicators as a tool for evaluating engine performance, and measuring valve events and gas-flow in steam and very large marine diesels. 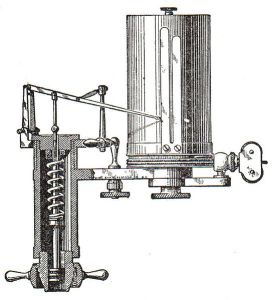 Given my later life in computing I concluded that a digital version of one of these instruments could be made to evaluate the performance of Befur’s engine.

I penned an article for The SBA’s Funnel magazine, but the publication of this has been delayed, so I am publishing it here for those interested.

It’s still a prototype, and in need of further development, but it has provided some interesting data – which at least prompted further analysis and investigations into what happens inside Befur’e engine…

I have attached to this post a PDF describing the Digital Engine Indicator, which you can read and download here

Commentary on the article: As noted above, this is a prototype, and since writing it I have realised there is a significant error in the software.

It assumes that the LP crank LEADS the HP, whereas it in fact LAGS the HP cylinder (that’s what happens when you are writing software at home and the boat is on the dock 50miles away)… So some of the horrid LP data might result from that.

I also realise that the PIC includes regulated reference voltages, that I should have used (more software updates needed), and this might reduce the “ringing”..

Lastly, we have realised since I wrote the article, that the vacuum was much higher than we thought, (because the gauge needed calibrating), so the LP data will be very wrong. I think the only fix for this (given we can’t find any differential pressure gauges) will be to measure the system with a big leak in the condenser circuit, so we get real measurements, and accept the fact that the diagrams will understate the actual power from the LP cylinder. (or maybe we can make little air-tight housings for the sensors connected to the condenser circuit, and fool them into thinking the actual vacuum is ambient air pressure….)

However, as you will see in our next blog post on valve timing, we have used the hints provided by the Indicator that all was not well, to embark on a program of measurement of valve events, components. Also with the assistance of smarter people (AKA John Maltby), undertake a geometric analysis of the valve gear as drawn and as built to try to improve things.

So, if we can improve the geometry and engineering, when we next get in the water to do some testing  we might get better pictures.!